Under my HMO plan, I'm only entitled to a Swift FX.
If I could solve the hurricane blast from the vent I'd actually be happy with it.

Of the various weird and wonderful solutions to this problem that I've read about, the one that made the most sense to me is taping on a sparse-weave gauze.

I know most of you have moved on to the P10 etc. I just wondered if there was ever a bottom line conclusion about whether this fix to the Swift FX affects CO2 clearance?
_________________
Top 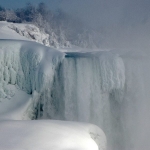 First, I want to give credit where credit is due. Back when the Swift FX was the brand new spiffy nasal pillows mask on the market, complaints about the jet plane exhaust stream from the FX were not uncommon. Several suggestions on homemade "fixes" for the problem were made on FX Swift Mask & Being Awoken by the Blasts of Air Pressure. A poster named greg-g posted his variation of a fix by another poster on the thread Swift FX air blast fixed.

By the time the diffuser that HoseCrusher had made me wore out, I was able to devise my own diffuser with HoseCrusher's description and my worn out diffuser to work with. Over the years, I've made several of them, all pretty much the same.

Several provisos have to be made, and they are the same ones that HoseCrusher made in his description:

1) The instructions that come with the Swift FX (and other masks) warn not to use any kind of diffuser. Hence, if you choose to do something like this, you do so at your own risk. The vents are there to flush out the CO2 you exhale so that you don't rebreathe it. If you are very worried about rebreathing your CO2, you'd be better off finding a mask that you don't have to modify.

2) In my case, I noticed no real difference in the leak rates as shown in SleepyHead or Oscar when I was using a PR System One BiPAP Auto and when I was using a PR DreamStation Auto. Those machines record total leak and SleepyHead and Oscar will display the total leak graph. This is relevant in my case because my standard, total leak rate with a bare naked Swift FX has always been below the expected leak rate for the Swift FX at the pressures I typically use. Since Resmed machines only report excess leak rates, its reasonable to assume that the number a Resmed machine subtracts off the total leak rate in order to obtain the excess leak rate may be more than my actual bare naked Swift FX leak rate tends to be.

3) I use rather low pressures---my max IPAP is currently set to 9, my min EPAP is set to 4. With both the DreamStation and the AirCurve I am currently experimenting with, my 95% IPAP is usually pretty close to 9, but the median EPAP is pretty close to 4cm. Because I am using low pressures to begin with, my intentional leak rate with the Swift FX is between 20 L/min (pressure = 4cm) and 30 L/min (pressure = 9cm). It is possible that if you use higher pressures, you might see more of a drop in the total leak rate---I really don't know.

Now that the provisos are out of the way, what does my homemade diffuser for the Swift FX look like? It's easiest to show some pictures.

First, here's what a bare naked Swift FX looks like: 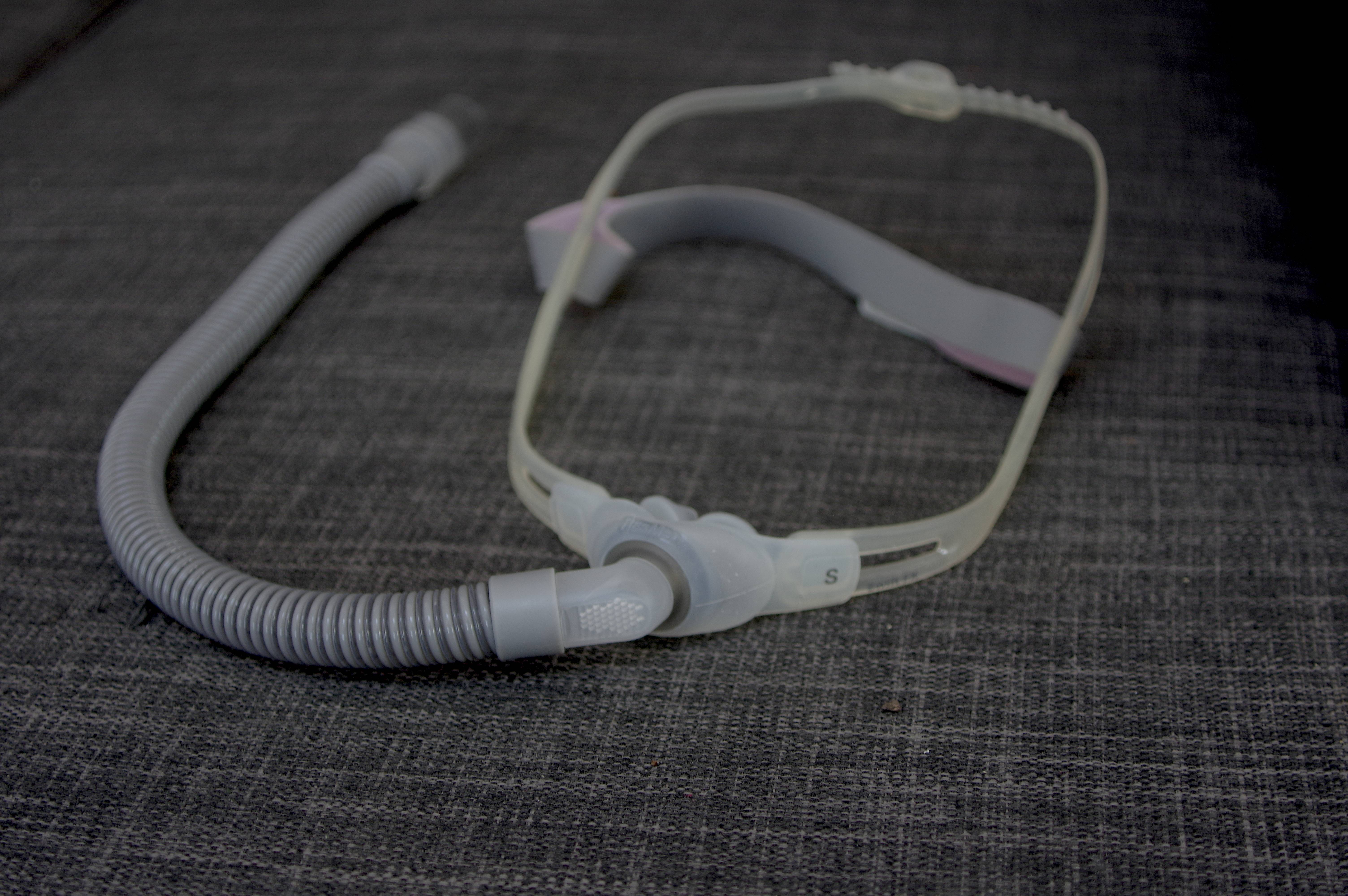 The vents are the small holes that you can see on the connector between the pillows themselves and the small hose. They're angled so as to prevent the exhaust flow from hitting a bed partner. But that means the exhaust flow hits the user's upper arms or chest (if you route the hose down from your nose) or the user's face/eyes (if you route the hose up over your head). The flow is also concentrated enough to bounce off bedcovers and be reflected back into your face if it hits them.

Next, here's my Swift FX all wrapped up in everything I use when I sleep with it: 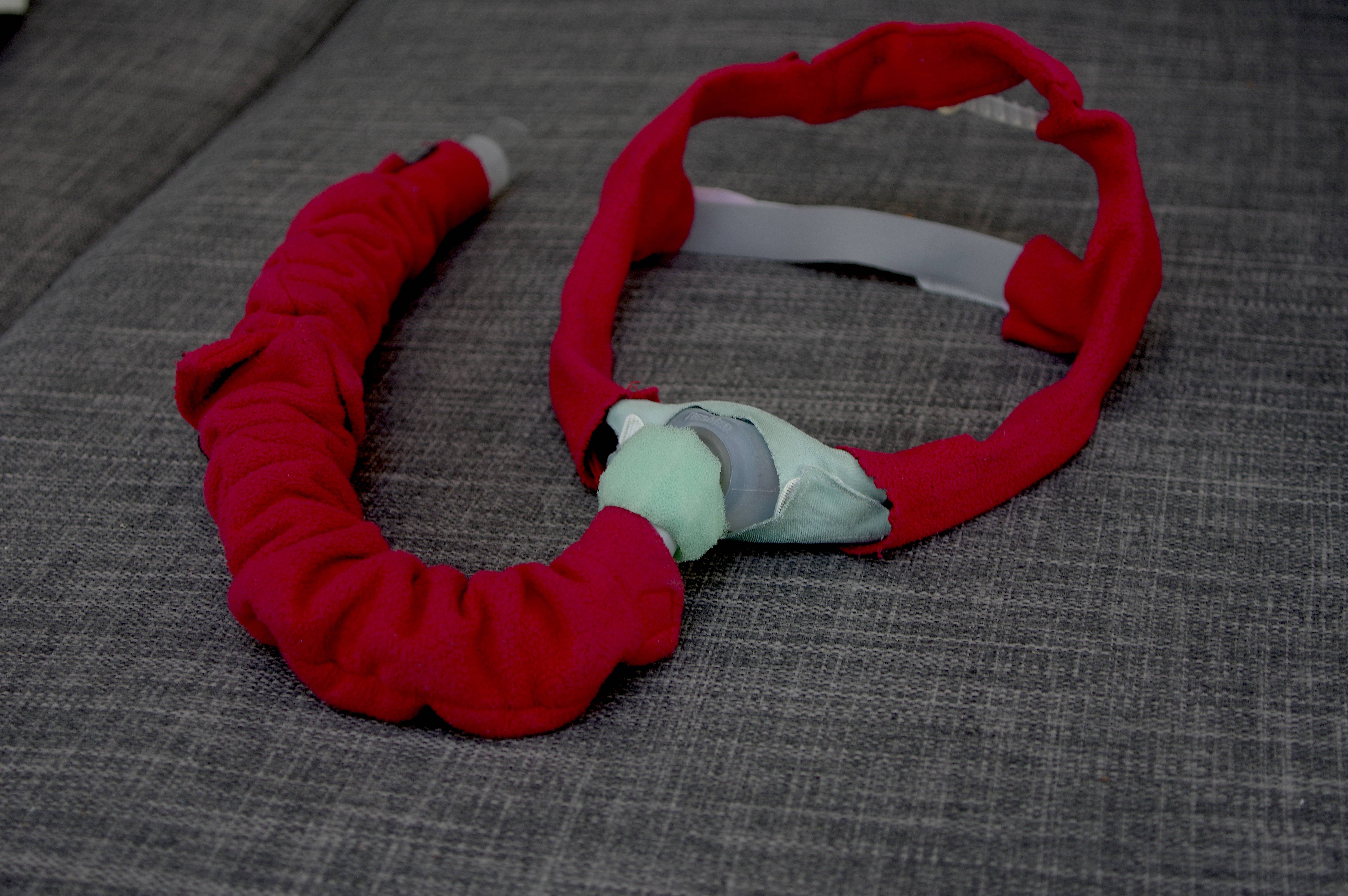 You can see I have a full Padacheek mask pad that keeps the silicone from touching me, a Padacheek pillows cozy, and two Padacheek short hose cozies on the short hose. The diffuser is the green piece of foam that's below the pillows and above the hose cozy.

The diffuser was cut out of an unused (obviously) air filter for a lawnmower engine (if I recall correctly). The density of this foam is pretty close to the density of the reusable black foam filters that go in the back of a System One machine. I've long thought that if there were just a simple way of securely attaching one of those filters over the exhaust vents for the Swift FX, that would work just as well. But I haven't come up with a way of doing that.

To get a better idea of what this looks like, here are a couple of pictures of the diffuser sitting on it's bottom: 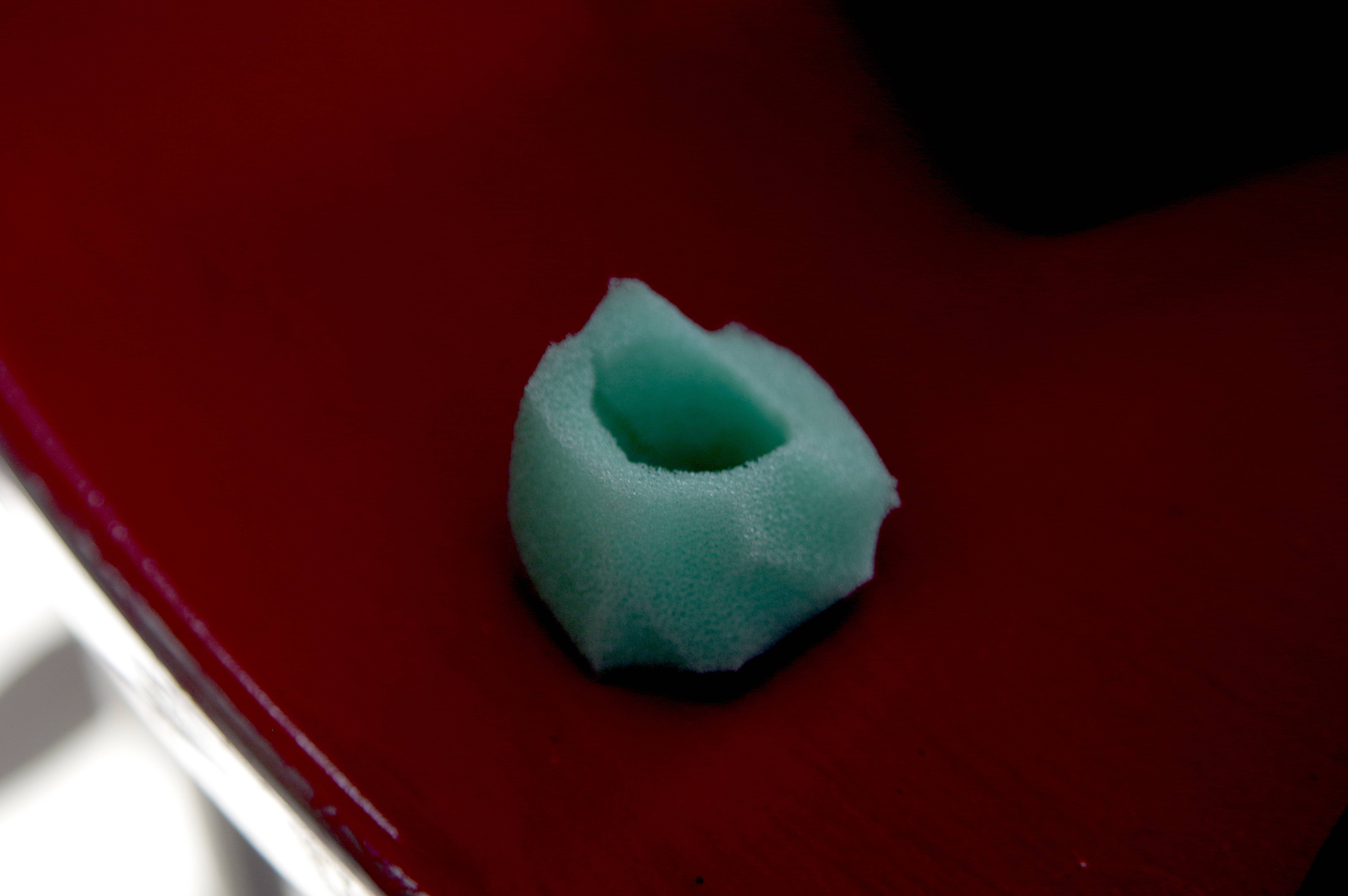 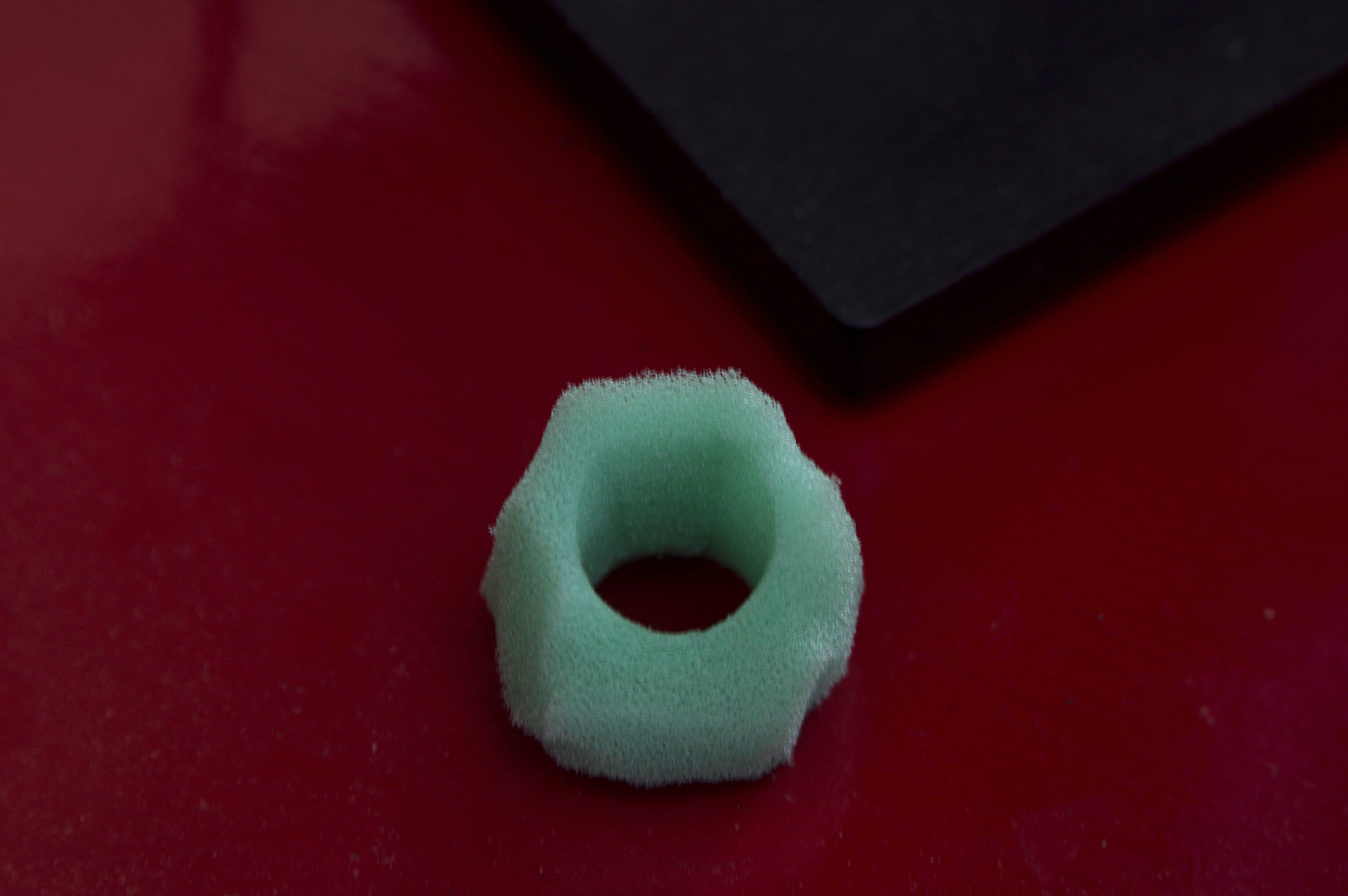 To make this thing, I start by cutting a block of foam that is roughly the right height and big enough for me to start working on cutting the hole out of the middle. The hardest part of cutting this thing out of a block of foam is getting the hole the right size. And for me, that's done with nothing more than a sharp pair of scissors and a lot of prudent snipping here and there until I get a hole that will just barely slip over the connector and cover the exhaust vents.

Once I can slip the connector into the hose, I start trimming around the outside until it's more or less the correct "width". Here are some pictures that show how the diffuser fits onto the hose connector with the exhaust vents. 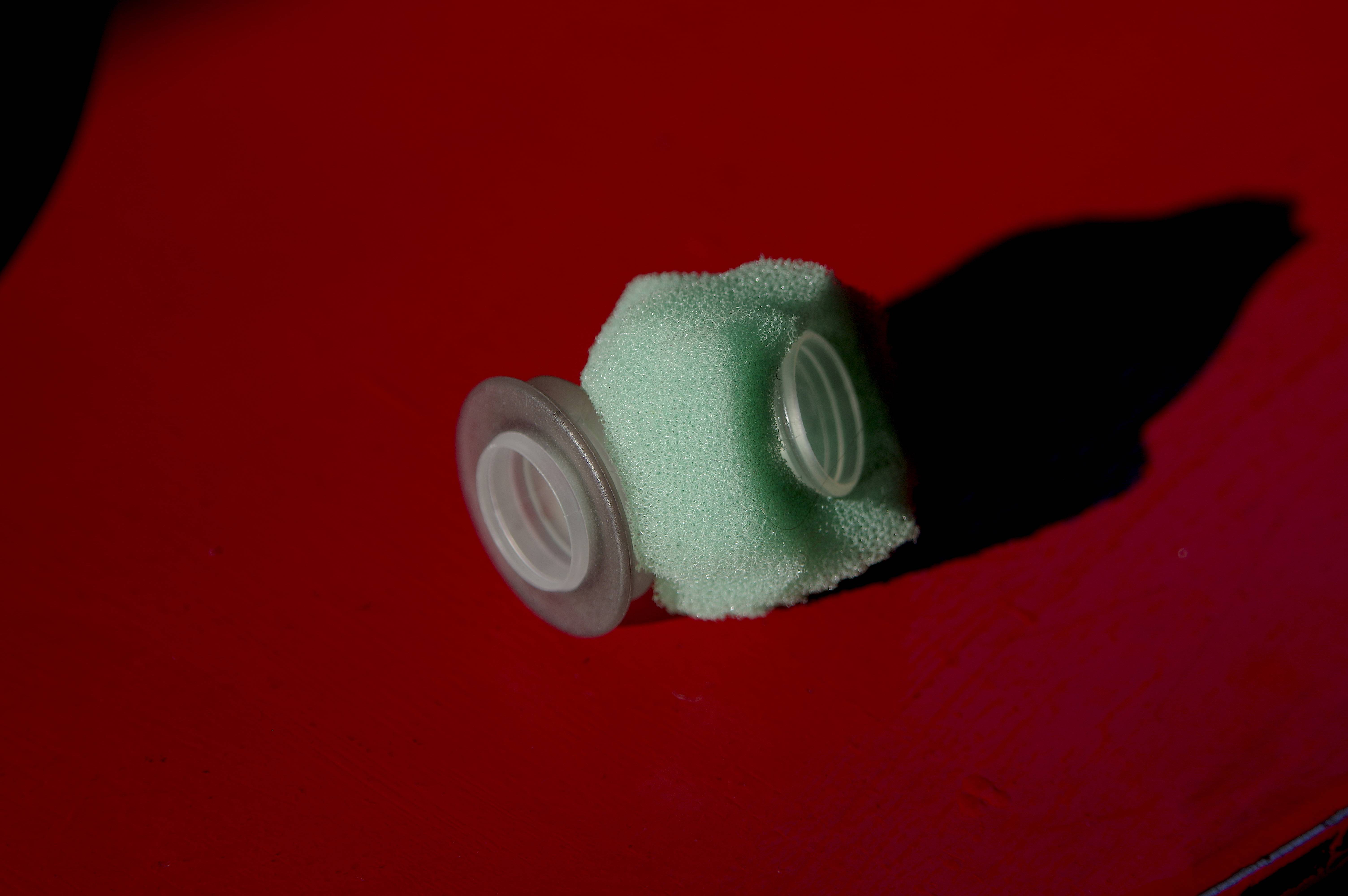 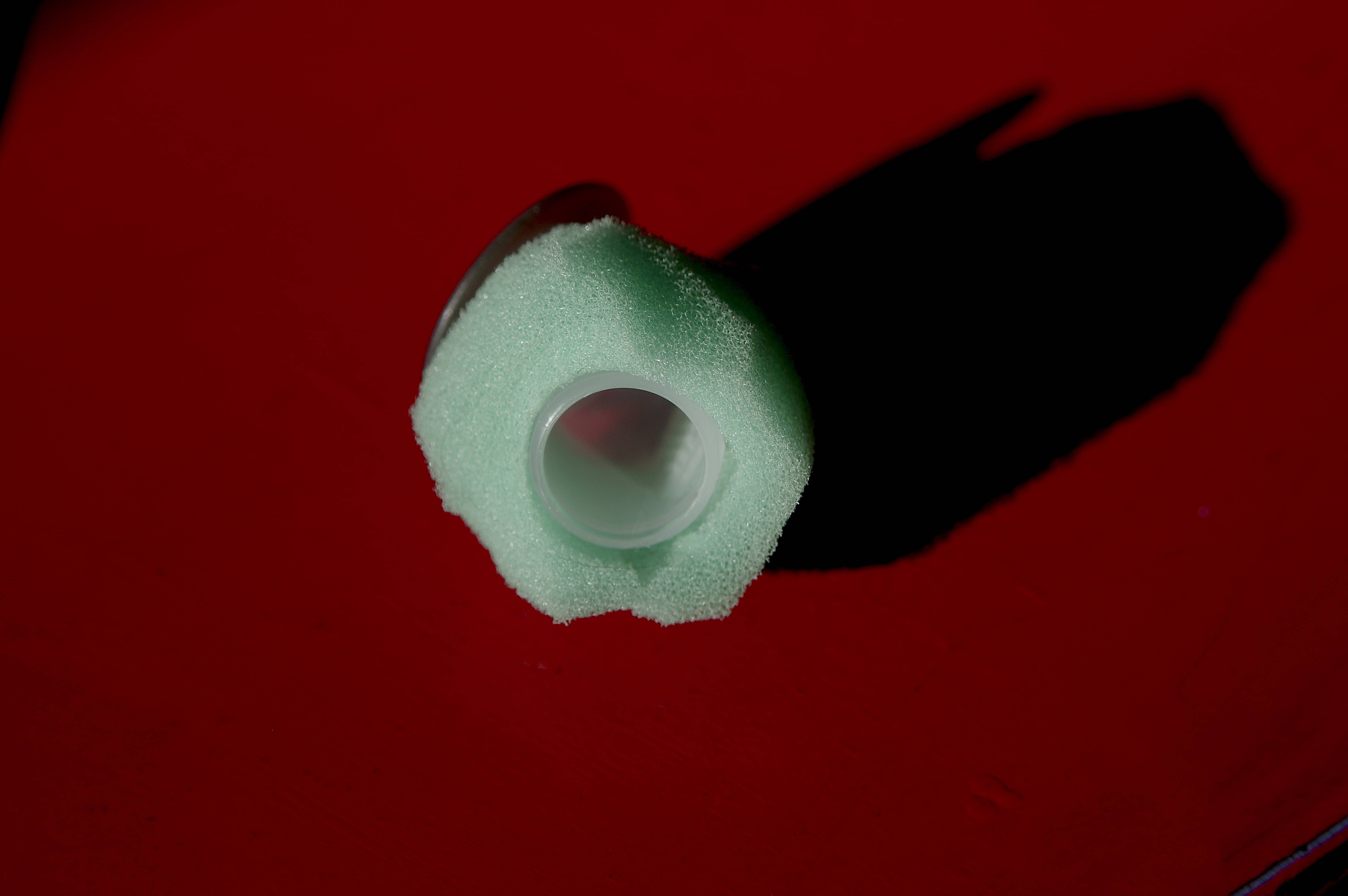 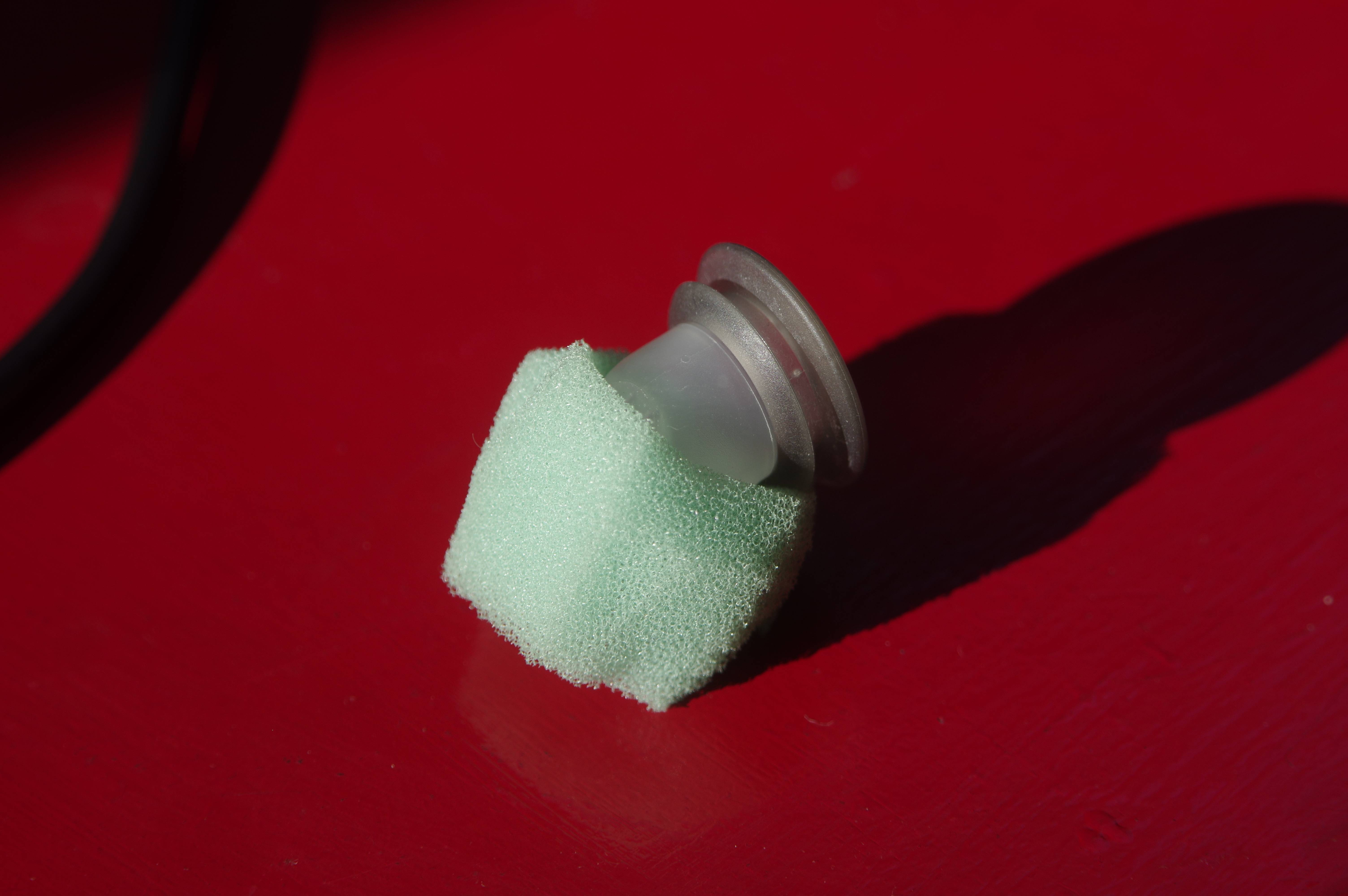 Because the diffuser is made out of foam, I'll hand wash it occasionally the same way I wash my husband's System One filters. (But his filters do get washed more frequently than my diffuser does.)
_________________
Joined as robysue on 9/18/10. Forgot my password & the email I used was on a machine that has long since died & gone to computer heaven.

Under my HMO plan, I'm only entitled to a Swift FX.

Is it that you must have an RX that specifies what mask you can get your HMO to pay for (Kaiser does this) or does your HMO only cover a Swift FX for everyone?

Kaiser has a formulary with most of the popular masks on it, but you have to get them to change your RX if you want a different mask than the one they have specified on your RX (I don't know why, they pay Crapria a flat fee for every mask, as long as it's on their formulary). I can't imagine any insurer restricting all of their members to only one brand/type of mask, though.
_________________
What you need to know before you meet your DME http://tinyurl.com/2arffqx
Taming the Mirage Quattro http://tinyurl.com/2ft3lh8
Swift FX Fitting Guide http://tinyurl.com/22ur9ts
Don't Pay that Upcharge! http://tinyurl.com/2ck48rm

robysue, very interesting, thanks so much! I'll have to figure out what material to use - I don't have a lawnmower

Janknitz, I'm not in the USA

Y'all moved on from the Swift FX years ago, we are dumped with ResMed's old excess stock

robysue, very interesting, thanks so much! I'll have to figure out what material to use - I don't have a lawnmower

Janknitz, I'm not in the USA

Y'all moved on from the Swift FX years ago, we are dumped with ResMed's old excess stock

Keep this in mind: The Swift FX is a really nice mask---if the jet flow exhaust doesn't bother you or if you can find some way that you are comfortable dampening it.

The thing I like the most about the P10 is that when those mesh vents are not full of water (from rainout), the exhaust flow is pretty much silent and there's no noticeable stream of air hitting you (or your partner) in the chest, arms, face, etc.

The thing I dislike the most about the FX is the jet stream exhaust flow.

The two things I dislike about the P10 is the hard platform the pillows are attached to and the headgear does not hold up as well as the headgear for the FX.
_________________
Joined as robysue on 9/18/10. Forgot my password & the email I used was on a machine that has long since died & gone to computer heaven.

I know you started off saying you can only get a swift FX mask. That's what i used for years, but then i tried an Airfit P30i. It has a diffuser at the nose, but the majority of the venting seems to be at the connection on top of your head. I find it much easier to deal with the hose connecting at that location, and the diffuser at the nose doesnt make noise if the airflow hits something. I have gotten almost a year out of the headgear so far. It would be nice if replacement diffusers were available but i have found a way to fish them out and replace them. The airfit is a little noisier for the wearer, but I find it a significant improvement over the swift FX.
Jim
_________________
Resmed Airsense 10 Autoset, Swift FX nasal pillows mask
Top