I've been using a F30i for a couple of years with my CPAP and then BiPAP machines. About a couple of months ago I switched to an ASV machine (central apnea) and my AHI tumbled from over 20 to 2-3. That was short-lived because I had nose surgery and the first time in my life I could breathe through my nose. I stopped using my ASV machine for three weeks to allow my nose to heal. When I started to use the machine again I used my old N30i mask, a mask that I couldn't use before due to a deviated septum and nasal valve collapse. Having been a mouth breather for much of my life I struggled keeping my mouth shut. I then taped my mouth shut at night, and after a week of doing this I've begun to sleep quite well. My AHI is under 1. However, according to MyAir, much to my surprise, leaks are in the 20-30 L/min range.

This situation creates several questions/changes:
Anyway, I would love to hear your suggestions and comments. 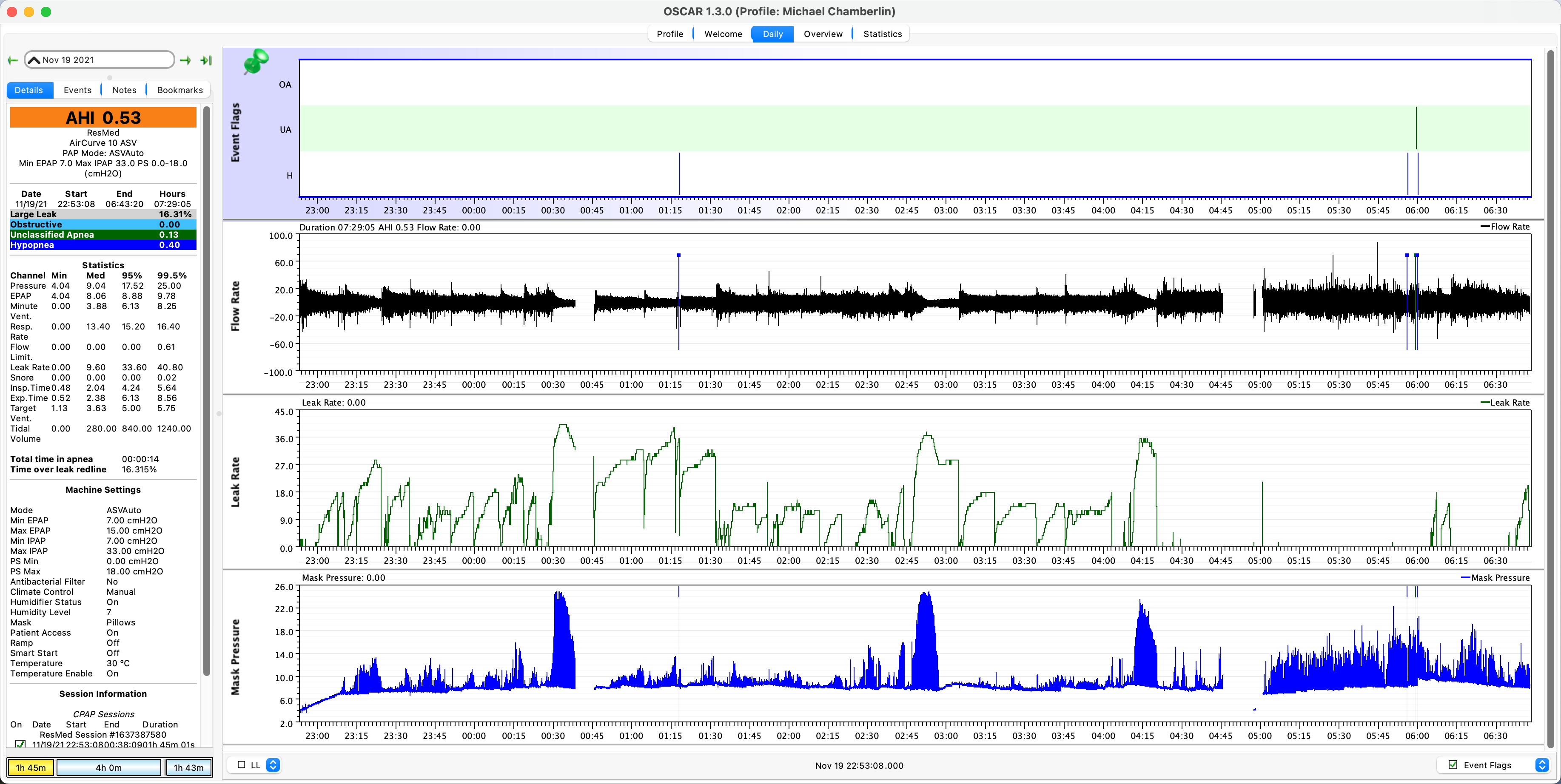 Attached is my sleep file from last night.
Michael
Top

Actually the leak numbers reported on MyAir (and the machine LCD display) are what we call 95% numbers and what that means is that for 95% of the night the pressure was AT OR BELOW those numbers. Does NOT mean that is where you spent 95% of the night. It is NOT an overall average leak for the night either.

You would need to be using OSCAR so see exactly what the leak situation is but the machine can do a very decent job recording, responding and compensating for leaks up to around 35 L/min. Your AHI is probably accurate and not much is happening. Now if you used OSCAR and spent half the night in leaks up around 50 L/min we might question the accuracy of the AHI.

There's no way to know for sure what your leak is coming from...it could be the loose tape on the mouth or it could simply be mask movement.
I would suggest using OSCAR and look at the actual leak detailed graphs and see exactly what it going on before I started worrying about it.....assuming the leaks aren't waking you up.
Maybe do a more secure taping of the mouth so the tape can't come loose???? And then see what the leak numbers are.
Mask: Bleep no headgear mask.. https://bleepsleep.com/
Machine: AirCurve 10 VAuto

I just downloaded Oscar and posted my data from last night.

Thank you. The leaks do not wake me up, except in the late morning hours when I seem to stop breathing, my cheeks fill with air and I whistle air through my lips. Most of the night I'm oblivious to what's happening.

I'm currently using 1" 3M Micropore tape. It sticks all night, but in the morning it's a little loose, enough to allow some whistling when my cheeks fill with air.

Right click the mouse over the words Leak Rate on the leak graph and expand the menu and click on "dotted lines" and then put a check mark in the box for "show upper threshold " then a red line will appear and make it easy for you to see when you went over 24 L/min.

While your leak graph is a bit ugly for sure....the bulk of the time you weren't leaking so bad that the machine might miss flagging of events.

You obviously went above 24 for some periods of time and the machine should have flagged it but it didn't.
Makes me wonder if something in OSCAR is turned off but it should have been turned on by default....unless you made changes by accident.
Mask: Bleep no headgear mask.. https://bleepsleep.com/
Machine: AirCurve 10 VAuto

I just downloaded the new version of Oscar (for Mac). I didn't change any settings (at least not purposefully). Large leaks were NOT turned on. I set the threshold as you described. Here's my updated screenshot.

I'm going to try the P30i cushion tonight to see what difference that might make - if I can tolerate the nose insert.

Is the P30i the same "pillows" setting on the machine as the N30i?

I would be more inclined to think mask movement leak than mouth leak.
At any rate time spent over 30 to 35 L/min is actually very minimal and time over 24 L/min in total was only about 16% of the time which is far from horrible especially since you sleep through it. Mr Frowny face doesn't even show up until at least 30% of the night is above 24 L/min.

So....while ugly leaks....the bulk of the night your leaks weren't of the magnitude that we would worry about the machine missing flagging events....so we can trust the AHI.

This latest version of OSCAR should have had LL flagging turned on but I don't use a Mac and am not a party to its development so maybe it wasn't turned on by default. Anyhow...you got it fixed now and I think how it makes it so much easier to evaluate leaks.

I think maybe the mask frame is allowing the mask to move a bit. Your leaks look very similar to what mine did when I tried a similar mask and the frame was too big.
Play around with trying to snug things up a bit if you can.
Mask: Bleep no headgear mask.. https://bleepsleep.com/
Machine: AirCurve 10 VAuto

I'm using the small frame, but I have a small face. I'll make things a bit tighter, if my nose can handle it.

I can't answer that question because I have never used either.
I did briefly try on a P30i just for grins but I found the frame and the noise highly annoying and I didn't even want to try to sleep with it.
Now some years back I did try the similar mask that Respironics makes in both the under the nose cushion and pillow version but the frame for me was just too small. Both products kept sliding too much though I was able to snug it up a bit with the fleece side covers use...and I was trying the small frame.

You might think about using some sort of fleece covering on the frame and see if that helps snug things up.
Overall make things a bit more snug without having to crank down that back strap so much.
What I did with the DreamWear (frame like the P30i/N30i) was wrapping the sides in fleece as well as a bit of the top in an effort to snug up the frame fit. It did help and while I was able to sleep with the DreamWear....I didn't like it well enough to abandon my nasal pillow mask at the time which I think was the P10.

In general though I would expect the pillow version to be a bit more stable and less likely to leak than the under the nose plain cushion thing. I think that the way that pillows need to be fitted might just be less likely to move and leak from the least little movement. So something to think about trying as well...but I would try fleece covers first.
I don't know if padacheek.com has fleece covers for the N30i/P30i frame or not. You might look but they would be easy to make as a DIY project.
Mask: Bleep no headgear mask.. https://bleepsleep.com/
Machine: AirCurve 10 VAuto


I found the P30i much more stable than the N30i -- the pillows tended to "move with me" more, avoiding the leaks I had with the N30i. (I move around a lot at night.)

For the frame... The proper "fit" is described by Resmed as having the frame between your ear and eye -- and not too close to either. Both sizes met that criteria on my head, and both worked about the same for me. One thing of note is that the Small frame, since it sits further forward, tends to pull the pillows "up" better whereas the Standard tends to pull the pillows "back" (towards face) better. So which is better? All depends on your head and the shape of your nose.

For the pillows... Get multiple sizes and try them if you can. I always used Medium with other masks, but have found Large more comfortable with the P30i. The pillow openings should be just *slightly* smaller than your nares. If you pick a size that's too small, they will protrude too far into your nares and will NOT be comfortable.
Resmed Airsense 11 Autoset
Resmed ClimatelineAir-11 Tube
Resmed P30i Mask
Top

Last night I wore the medium P30i cushion and snugged up the straps on the headgear a bit. That seemed to help. Even when I switched back to the small N30i cushion around 4 AM I still had fewer leaks than I've had previously. So, maybe it's not the cushion that's been the issue, but the looseness of the headgear.

My nose is more sore than it has been, but as I recover from my nose surgery that will get better.

I used the medium P30i cushions as suggested since insert does not go into my nose as far as the small cushions do, and that seemed to help. I did switch back to the N30i early in the morning because my nose was quite sore; I blow my nose a lot following my surgery and as a result the edges of my nose are tender. That soreness will decrease with time. I did find the P30i cushions to be more stable on my nose than the N30i.

I ordered the small and medium (new style) N30i cushions on Amazon so I'll experiment with those cushions when they arrive. However, once my nose heals a bit more, I may gravitate to the medium P30i cushions. Time will tell. 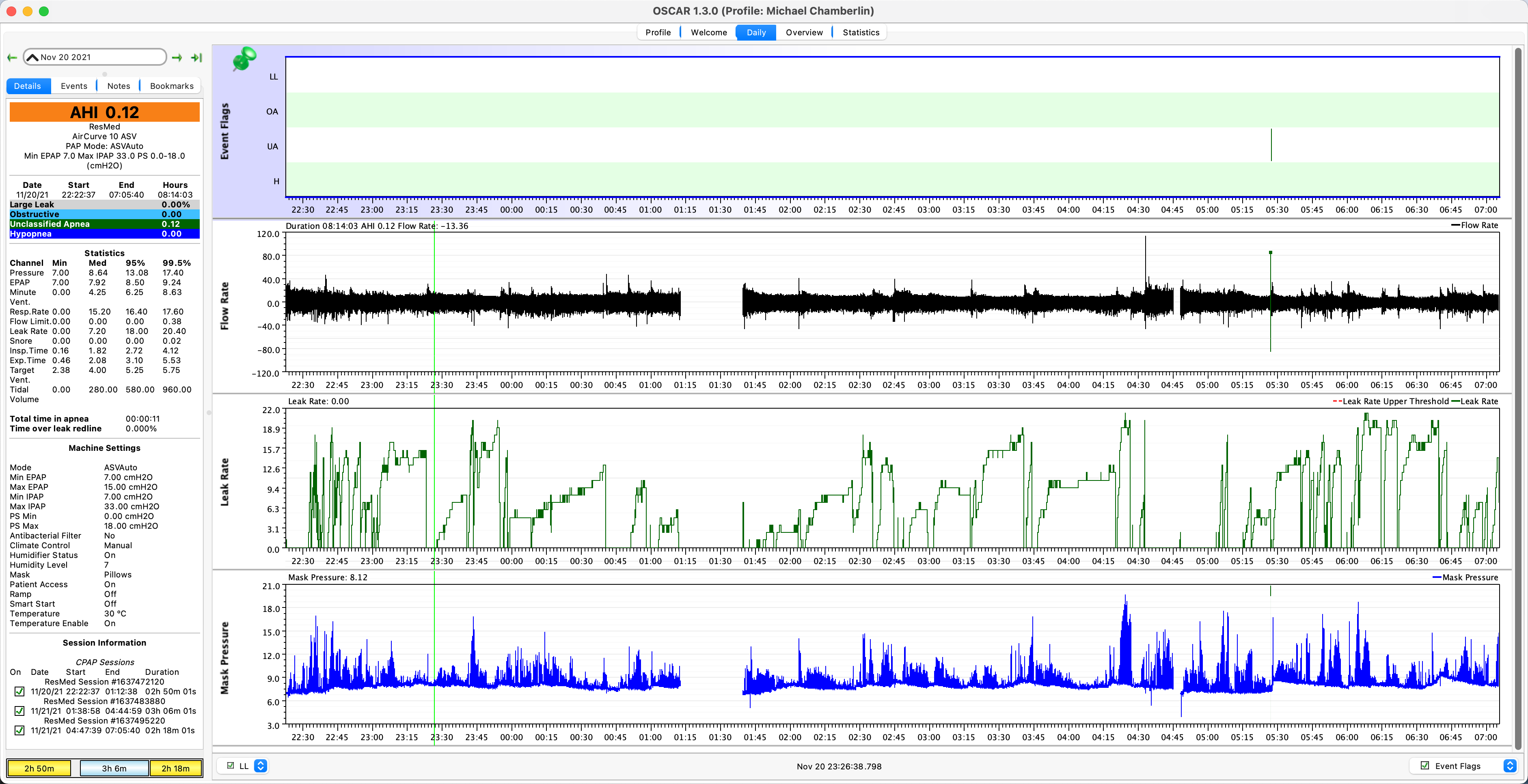 The large leaks are gone from your most recent chart, so that's good. But if you had to tighten the headgear to the point the P30i was painful, something's still wrong.

It can take a lot of experimentation to find the best mask. You're on the right track trying different types, and different sizes, so don't give up until you find a combination that works and is comfortable.

I'm actually surprised at that much leakage from the P30i. My "95% leak rate" is consistently 0 with the P30i, with median pressure about 10.5, and my headgear is "firm" but certainly not "tight." Your charts look like mouth leaks to me, but you've said you're taping so that *should* eliminate that. Do you "feel" the P30i leaking around your nostrils? That much leakage should be really apparent if it is coming from around the pillows.
Resmed Airsense 11 Autoset
Resmed ClimatelineAir-11 Tube
Resmed P30i Mask
Top

My nose is still sore from my nose surgery 3-4 weeks ago. That is why The P30i cushions hurt a bit, as well as the constant nasal drip resulting in red, sensitive skin around the nose. The small P30i's are the right size according to the size chart. However, I can put the medium prongs (barely) into my nostrils (thanks to the surgery), so that's what I used last night. Large cushions, though I don't have any, would not fit.
Michael
Top